We’ve been waiting for a long time to live that moment. Built in April 2020 during the beginning of the pandemic, Bullbay skatepark AKA FREEDOM Skatepark as been functioning with help of volunteers, sponsors and donors as best as we could with Freedom skatepark foundation members and staff. It is a great success in term of impact on the youth and development of skateboarding in Jamaica. Built by volunteers from 10 countries. The project coordinated by CJF Concrete Jungle Foundation, is the first JA skatepark to be active, alive and kicking ! With its educational programs, homework, music, gardening, this is a safe place for kids and young adults, a welcoming place for the all fambly...We hope more Freedom concrete park will rise from the Will of freedom fighters and skaters. We wish long life and many children to the @freedomskateparkja and his fambly)

ONE LOVE, ONE HUMANITY UNDER ONE SUN ) Rémy Walter, founder, and director of Jamaica Skate Culture Foundation told The Gleaner that his Intention and that of the other partners is to build more skateparks across Jamaica. He argued that this could not be the only locations’ kids to travel from other parishes to visit and engage in the sport. Walter stated that additional parks could result in the hosting of interparish competitions and give youth the opportunity to rack up accolades and win prizes. He also hopes to develop a mobile skatepark program, where skateparks are brought to schools across the Island for more children to be exposed to the sport.”Beyond skateboarding, we try to bring education. We’re trying to build values and respect; we try to teach them something about life, about sharing, Walter said.”lt’s action time, and the youth of this country need support. They need education because so much violence going on, not only ln Jamaica … lt’ s ugly, but what we need to do is to set an example and do our best to try to help those kids to develop into better persons; he added.  Walter said that he ls currently engaging partners in discussions to build a skatepark in Negril.

During the opening ceremony, Alando Terrelonge, minister of state for culture, gender, entertainment, and sports, noted that sport empowers youth and has to ability to make considerably change lives. every”Sports may not be able to solve every single minute detail of crime and violence, but certainly, it is highly effective when used and combined with other that holistic interventions and programmes that can influence and engender hope; he said.

Read Eli Reed Interview one of our Ambassador in Thrasher Magazine Nov. about Jamaica skateboarding and RVCA Jamaica Tour with PRO Team : Mark Suciu skater of the year, Curren Caples, Donta Hill, Julian Davidson, Evan Mock. Thanks to Austin and RVCA crew for this opportunity. We need more pros coming on the Island and more skateparks ) Come again ! ! !

Watch Kayla Wheeler one of our board director and Kadiya McDonald on TVJ Week end Smile empowering girls through skateboarding and Kayla in an interview in “Empress Golding / Nation Wide radio. On August 13th, the GIRL SKATE DAY was a big success in Bull Bay’s at FREEDOM skatepark @freedomskateparkja

Free classes on Saturday 11-3 pm come and join. Kayla Wheeler from JSC and Rayquon in this video as teachers.

Gleaner article-Keep the children on boards

Here is an article by Daniele Wheeler form the Gleaner about Freedom skatepark, and the development of skateboarding in JA. About the coming of the pros for a trip with demos and videos, how it will help the cause of this brand new olympic sports that brings new opportunities for new talents. How the skatepark as become a social asset for Bull bay and Kingston. Also the positive impact it has on tourism and how it could attracts new visitors on the island…All positive vibrations !  see online the article  by daniel.wheeler@gleanerjm.com

You’ re all welcome this Wednesday May 18 th from 3 pm to 6 pm at the Freedom skatepark in Bull bay 8 miles with RVCA pros team : Mark Suciu, Donta Hill, Curren Caples, Julian Davidson and their JA ambassador Eli Reed ! Thanks to @rvcaskate #loveskateboarding @freedomskateparkja 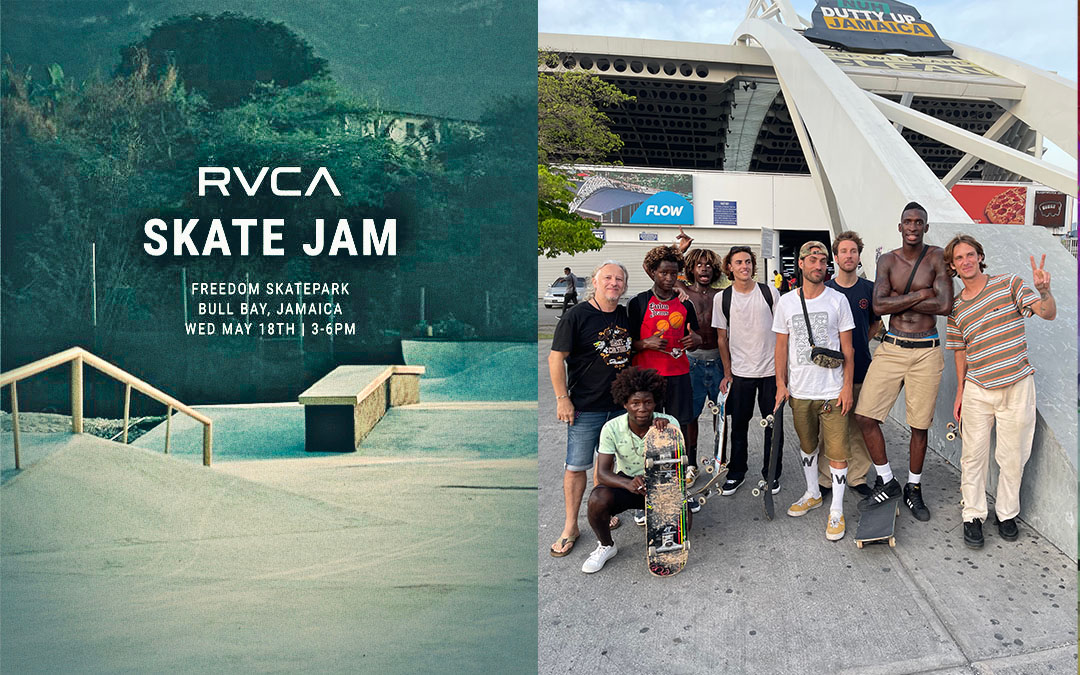 Today 5 th of May little interview with Neville Bell during morning show ‘Smile Jamaica on TVJ about Freedom Skatepark project and the evolution of skateboarding in JAMAICA…On our YT channel. So much to say so little time, thanks TVJ, Big up Neville for the vibes !

The Concrete Jungle Foundation (CJF) is a UK registered charity organization which works to build skateparks in underprivileged communities around the world. These public parks are then locally staffed and facilitated with youth programs and centers. The Freedom Skatepark is CJF’s third project and is located in 8 mile, Bull Bay, Jamaica – just south of Kingston. This video gives you a glimpse of our graduating class and their first skateboarding excursion to Boston Bay. Enjoy !
@concretejunglefoundation
@fiegodlores

Freedom Skatepark is the second skatepark in Jamaica. Made possible by the Concrete Jungle Foundation, their many partners and passionate young local surfers and skaters, the SK876 crew. The park has given the youth of Jamaica an outlet to express themselves. In this documentary we explore the process of how and why the park was built, along with the work they have done over a year after it’s completion. Thank you to Concrete Jungle Foundation and everyone involved in making the Freedom Skatepark a reality…

A CJF video
During the summer season of 2021, a new group of Edu-Skate Graduates emerged at the Freedom Skatepark in Jamaica: The Stars of Tomorrow! Check out why these kids graduated from the programme !

December 23, 2021 JAM SK8 CULT Foundation No Comments
Great session at the freedom skatepark for Christmas, good skate, respectful and well organized by the the FS crew Big up to all the judges, speakers, volunteers, staff, board of the foundation and all visitors who enjoyed this refreshing moment

LECHOPPE Skateshop and Jamaica Skate Culture donated 12 new decks for Bull Bay Skateboard School…and gifts during the event.  Boards to the winners and all children came back with griptape, tshirts, and goodies.

Hey guys, soon our director is coming back with a homestudio equipement that will allow us to make music workshop in Boston youth center and make original soundtrack for our videos, will be Jamming ) we also will bring some boards for Freedom skatepark skate school, soon come JSC

The Freedom To Flourish documentary by jago Stock

Have a taste of the “FREEDOM to Flourish” !  Concrete Jungle Foundation present this 2021 documentary at the FREEDOM SKATEPARK in Bull Bay.

Seeing how skateboarding can change lives. Sparkels of poetry in a suburb of  Kingston. Fifteen minutes away from town. Facing ‘Copa Cobana’.

A FLIM by Jaco Stock and Tim Van Asdonc…

Concrete Jungle Foundation presents  ‘Freedom to Flourish’, a short documentary by Jago Stock. Let’s get into Freedom skatepark in Bull Bay, 8 miles in Jamaica, fifteen minutes from Kingston in St Andrew parish. The park has been made by Concrete Jungle Foundation a  European NJO with the help of volunteers from 10 countries, and partners such as Sandals , Seprod, the Skateroom, Flipping youth,  Paris Skate Culture, New Line, carib cement, Pre Mix, Tank Weld and Vinci JA for lending us essential tools. From march to April 2020 almost starting with the pandemic this has been an epic and happy adventure… In that movie you can feel and touch what is bring to the community and to those kids that started skateboarding with this concrete wave. Thanks to all that are making dreams come true and believe in the power of a piece of wood with wheels. Meet the staff, and the local actors such as SK876, Shama, Ivah ,Ronald, Daniel, Frogboss, Kayla, Rayquon and see the magic of a commun effort for the commun good. Thanks to the founders of this project and help putting it together : Kevin Bourke, Will Wilson from Flipping Youth and CJF for making it a reality. Big up to Paul and the Bull Bay football club, Jamnesia for hosting the crew, Julian Mair for fencing the park and all parents and volunteers in every day life of Freedom Skatepark JA !

If you like what you see, you can donate to maintain and improve the place and the youth center programme, on the Freedom foundation website. @freedomskateparkja

Andre “Wildfaya” Thompson stabbed at the age of 20 years old in Spanish town, was the main inspiration to create this safe place for all. In 2009 he was dreaming, asking out loud for a skatepark to be built for Jamaican youth. The skatepark is dedicated to his memory…His DREAM is fulfilled Discover him in this video from 2009

Musician Davian James has spent the past three weeks imparting his knowledge on a group of young boys, ages nine to 15, who turn up at Freedom Skatepark, a facility located close to Cable Hut beach in Bull Bay, St Andrew.

Skating through a brighter future

Nineteen-year-old Daniel Mattis finds solace in Freedom Skatepark, located in 8 Miles, Bull Bay, St Andrew. The public skateboarding venue, which has been operational since March, has been attracting several children who use it to hone their skating skills

Kareem is a journalist who help us when we did the Boston Bay contest march 2020, He finally visited recently Freedom skatepark at Bull Bay St Andrew, 15 minutes from Kingston. here is the video. Big up Kareem )

#KareemsQuest The Freedom Skatepark provides a safe haven for the kids in the Bull Bay and adjoining communities, that are often affected by crime and violence. The park is equipped with an office and an obstacle course for skaters. 0:00 Intro 1:16 Interview on Skate Park 3:13 Skate classes 9:54 Talking to a parent about skating 14:58 Homework program

Video from Concrete Jungle Foundation channel : “Most children in Jamaica have not been to school since the start of the pandemic. Some fall through the cracks of the online education system, as not everyone has access to a device or an internet connection. With support from @sandalsfoundation in funding and @seprodfoundation in alimentation, we started our Homework Programme at the Freedom Skatepark to provide more accessibility to education for our regular skatepark visitors. The youth responded incredibly well and engaged in our classes on a daily basis… despite having the beautiful @freedomskateparkja right next to the classroom to skate. We are proud our students value their education, so we took them on a fieldtrip before the Summer Programme starts at the Freedom Skatepark. Bigs ups to our teacher @icahwilmot” CJF

The Energetic Nomads were the first group of graduates from the Edu-Skate classes at the Freedom Skatepark in Jamaica. It has been a year that they’ve been skating and their progress has been surprising us on a daily basis. Head to the Concrete Jungle Foundation website to read the interview with the group and follow their Youtube page ! Skating news ! Spring brought a new mini ramp in St Thomas !  Supported by Joey Tershey & Laza Morgan , Josh Matlock as master builder . It’s Open to everyone who want to skate ! Big up to Eli Reed, St Andrew Crew and all those who helped.  One more spot ) …Not the last !